Hamam and sauna in Lutsk in the Pharaoh salon

(one girl, spend your time in the hamam or in the sauna)

Turkish bath or Hamam is one of the most popular types of recreation in our time. The culture of soaring in the hamam came to us from ancient times. Turkey, Libya, Iraq, Syria are rightfully considered the countries that opened this type of pair. It was the mysteries of the East that gave the world the hamam and its traditional form of steaming.
The rise of Islam contributed to the emergence of the Turkish bath. Since bathing in the bathroom was always considered to be bathing in one’s own mud in Arab culture, oriental baths began to appear. Feeling the Roman baths on himself, the Prophet Muhammad highly appreciated them, especially considering their beneficial properties for human health and procreation in general. Thus, the hamam gained fame in the Islamic world.

An interesting fact! The first hamami began to appear not in cities, but in deserts.

FEATURES OF THE TURKISH BATH in Lutsk

The Arabs were very barbaric towards everything Roman, so all the bath buildings of the Romans were mercilessly worn out. The main and main feature of the hammams was their unique structures, the uniqueness of the structure of the bath complexes is striking.

The roofs of the steam rooms have always been domed, and the number and size of rooms have always varied from one another. Traditionally, 5 different rooms were built in the hamam. Each room had its own temperature regime. Each room had its own special purpose. Moving from a cold room to a hot one, each visitor had the opportunity to enter the room for relaxation.
An interesting fact! Turkish baths were built on the principle of the palm. Each room emanated from one main one, like rays. Since ancient times, the hamam was considered a place of spiritual and physical cleansing, which contributed to the healing and strengthening of the strength of the spirit.
Note! The main distinguishing feature of a Turkish bath is the maximum air humidity. The temperature in such conditions is felt much stronger than in a dry space. Therefore, in hamams, it is maintained within 45-60 C.

CUSTOMS RELATED TO THE HAMAM 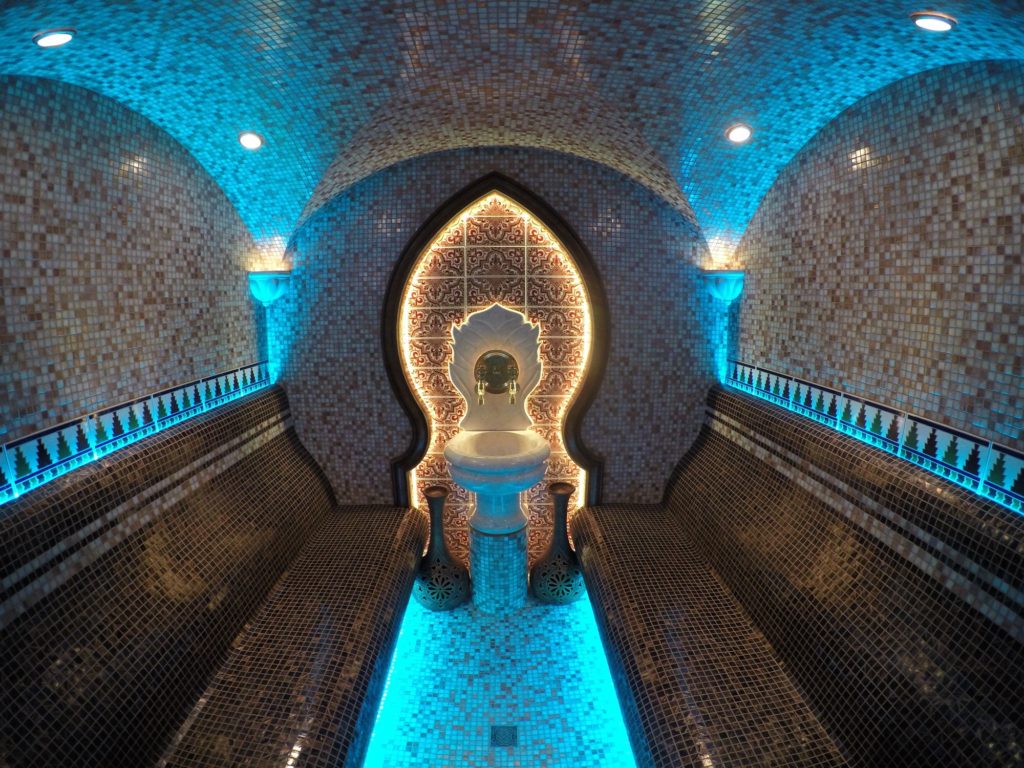 The Turkish bath is truly considered a place where everyone is equal. The richest people, who had their own baths, always attended the public one. By doing so, they showed that the rich are pure in body and soul. The fee that was paid at the entrance was not fixed, and everyone contributed as much as they could count on.

The bath complex has always been considered by the rest of the world. Social status, gender or external beauty were important here. Despite the cultural and religious principles that divided women and men, the bathhouse has never been a place in which such principles have weight. Free visit to the bathhouse at any time and, most importantly, the simultaneous attendance of the steam room by men and women – strongly distinguished the hamam against the background of the entertainment of the east.

The most and significant events in everyone’s life were celebrated in the bathhouse. Here are some of the main customs that are still followed today: When the first baby tooth appears in an infant. Parents are obliged to take all relatives to the bathhouse and provide music and refreshments for the guests. The main principles by which people were going to live, the vows and vows that were given, were sure to be noted in the hamam. The holiday was necessarily arranged, of course, at the expense of the person who makes a vow.
An interesting fact! On such holidays, the doors of the baths were open to everyone. The entrance was free, food and music for the rest were fully paid by the heroes of the occasion.
The interior of the Turkish bath deserves special attention. Unlike the Russian bath, the Turkish hamam is processed from the inside only with natural stone, mosaics or ceramics. A unique oriental design should convey the full richness of tradition. Each bath should be made of a dome-like roof. This condition is very important, since such a structure allows all condensate steam to roll down the walls.

The Turkish bath or sauna in Lutsk is the ideal place for body treatments. The first procedure is considered – warming up the body. In no case should you skip this stage or rush it. Relaxing in a fragrant couple, just enjoy the moment. At this stage, the tone of the body rises and the tone of the muscles relaxes. At the same time, the work of the heart and blood vessels improves, and toxins are also released.

The second procedure is massage. The Pharaoh salon, which has a hammam, provides many types of massage. The most popular massage is considered to be a massage using a special goat hair glove and special handmade soap. This massage is similar to manual peeling and is indispensable when going to the bathhouse.

The final stage of spa treatments in the hammam is considered to be wraps. This treatment is carried out using natural oils, natural essences, honey, sea salt and special clay. At the end of all procedures, the resting person is immersed in cold water. This method allows you to close the pores and get real pleasure and a complete feeling of cleanliness.

We invite you to visit a hammam or a sauna in our Pharaoh salon. We are always glad to see guests!